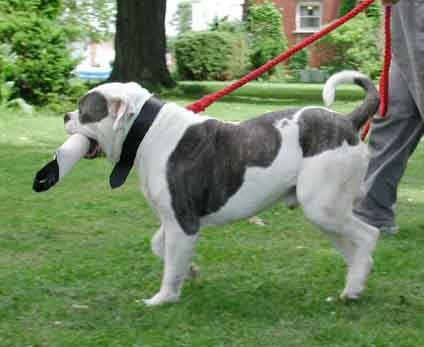 “Blue” was our first American Bulldog Johnson.  We visited Mr. John Daniel Johnson at his farm in Summerville Georgia at the end of 1998.

We had a tour of the kennels and Mr. Johnson introduced us to all of his dogs and showed us the puppies that he had available.

We picked a $2000 puppy, we left Mr. Johnson a deposit and arranged to drive back down to Mr. Johnson’s farm to pick up the puppy when it was ready.

When Mr. Johnson was alive it was easy to know whether you had a Johnson American Bulldog or not, you either bought it from him or you didn’t.

Mr. Johnson registered his dogs with the ARF, and the ARF started to register dogs with a C at the beginning of the registration number or a J, J was for Johnson type.

The dogs registered as Johnson had to have a completely Johnson lineage.

The ABRA has a 100% Johnson designation in their database too.

The original difference between the Johnson  and Scott types were the two men, John D. Johnson and Alan Scott.  Mr. Johnson and Mr. Scott were friends, they both had american bulldogs.  As the years went by the two men bred their dogs differently and the lines became more distinct.

Mr. Johnson wanted as big a bulldog as he could possible get and Mr. Scott had a different idea.

All of the dogs that we have owned and produced over the years have been mostly Johnson bloodlines.

We prefer the heavier boned dogs with shorter noses.

Blue was about 115 pounds and 25 inches at the withers.

The influences are English Bulldog, some say St. Bernard and Dogue de Bordeaux.

I see a lot of terrier and hound influence in the Scott line.